What Happens To Punks When They Get Old?

I wake up in the hotel with a double bed to myself. Sadly no L but also no collie either, which means I can stretch out a bit.

Our meeting and presentation goes well. Although we don't quite know how to take the Customer Liaison Manager who loves the system so much he tells everyone how much it is turning him on, graphically. I felt sorry for the two women in the meeting but they were obviously well used to it.

At 11am they thoughtfully arrange a fire drill. Everyone has to evacuate to the car park where it is bucketing it down with the rain. All the fire doors are locked so we can't even get our coats. Fire doors might stop a fire but I'm not sure they need to lock them; fire isn't that clever. All it's going to do is stop people escaping. I manage to shelter somewhere but my colleague is not so lucky and is declared the winner of the impromptu wet work shirt competition.

Its 6.30 when I get back home and I get a text from L saying she'll meet me between 7.30-7.45, which gives me enough time to entertain Doggo. Then I get another text saying 'see you at 7', so I rush down to her, only to notice when I get there, that the 7pm text pre-dates the 7.30 one. It's just that I didn't receive them in that order. Good old modern technology.

I have a Landlord in Cast then we head to the Rescue Rooms because tonight it's the Icicle Works. Our ticket numbers are 41 and 42, so we're expecting a nice cosy gig and we're not disappointed. L has said all along that she's aiming for the front row and she gets it. I warn her about crowd surfing, for a start she’ll make Daughter jealous but also there aren’t really enough people to surf along, it could be painful.

The support band are called Amsterdam but we only catch their last song, so it's difficult to comment but word has it they could be the next big thing. Although they would say that wouldn't they.

After being solo for something like 15 years, last year Ian McNabb surprised everybody by resurrecting the 'The Icicle Works' for a series of gigs. They obviously enjoyed it because they are back again this year. As it turns out though this isn't the original band, only Ian McNabb survives of the original line-up, although bass player Roy Corkill joined around 1990. Tonight he is joined by former Dodgy drummer Matthew Priest and keyboard player Richard Naiff, who apparently is fresh from touring with the Waterboys. He's quite a character is Richard, I can honestly say I've never seen anyone enjoy playing keyboards as much as he seemed to.

The first time I saw the Icicle Works back in the eighties, a friend had to talk me into going but I was impressed because they were a great live band and I subsequently went to see them several more times until they split up in the early nineties.

They start tonight with the 'When It All Comes Down', released when the band were at the height of their fame and it still sounds great. I think L immediately regrets being on the front row. You can't fault the view but they have the sound turned up very loud for such a small venue and every time Matthew Priest hits his bass drum the resulting throb and whoosh of air from the speaker parts the hair of the front three rows.

McNabb plays pretty much a 'favourites' set with the notable exception of 'Birds Fly' which is not played tonight but 'Evangeline', 'What She Did To My Mind', 'Seven Horses', 'Up Here In The North Of England' etc all are, along with some of the more sickly later stuff. McNabb also throws in one of this own solo tracks, which shows that he remains a very talented musician, although he still seems irked that people don't buy his solo albums but I think he's past caring now. 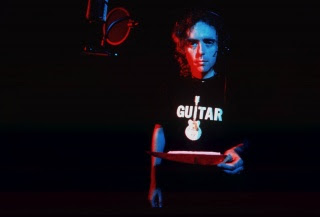 As we reach the end of the main set, I become aware of a chap with a Mohican dancing manically next to me. So if you ever wondered what happens to punks when they get too old to pogo to 'Pretty Vacant', well they go see Ian McNabb and freak out to 'Understanding Jane' instead. As for what happens to groupies when they get old, well I'm afraid they all get fat, hog the front row and step on my toes. Ouch.

The set list, which we can see from where we are, only lists one song as an encore, that being 'Hollow Horse' but after an enormously long time off stage they return to play three slightly more obscure album tracks instead. Presumably they needed the long break to discuss what they were going to play.

The crowd cheer them back for a second encore, quickly this time, to play the previously planned 'Hollow Horse'. One criticism of McNabb, and he is well know for this, is that there were too many karaoke moments tonight. On several songs McNabb stepped back from his mic during the chorus and cupped his ear encouraging the crowd to take over. Which they do but as it isn't a huge audience this isn't terribly effective. As he does this on 'Hollow Horse' I realise that this song isn't terribly easy to sing along to anyway, particularly when unaided by the vocalist. I hate it when bands do this sort of thing. It's one thing the audience joining in with the songs but it's another thing entirely if the singer takes a break and leaves them to it. We have, after all, paid our money to hear him sing.

They return for a third time to close with 'Love Is A Wonderful Colour', their one and only big hit. This is all very eighties, these days the trend is for no encores or grudgingly just the one. No one plays two these days, let alone three. I wondered if they might keep coming back on stage even if we all went home because it is clear that McNabb and his band are clearly having fun.