My Day Of Culture

We have a quiet lie-in because there is a sleepover in progress above us. Mind you they are making so much noise that they could drown out anything.

Later I take Doggo on the park again and then I meet L and Daughter at the Cinema.

I've been tempted by the good reviews of what really isn't my type of film and we go see 'Enchanted'. At least it can't possibly be as bad as the 'Golden Compass'. Made by Disney studios, the film starts in animated form, that is proper animated not CGI, in 'Andalasia' where Giselle (Amy Adams) is desperate to be rescued by her Prince Charming. The animated sequence goes on a bit but eventually Edward (James Marsden) duly turns up and saves her from a troll and consequently they are set to be married. But Edward's wicked stepmother (Susan Sarandon) does not approve and throws Giselle into a portal that leads to hell.

Hell turns out to be New York, where she climbs out of a manhole cover in full princess regalia. A pessimistic divorce lawyer (Patrick Dempsey) gives her a room for the night where she makes herself clothes out of his curtains. While he introduces her to the 'real' world, he is intrigued by Giselle's attitude towards love and her belief in living 'Happily After Ever', usually in a huge castle, which contradicts his own real life experiences and the modern day notion of getting to know someone first. 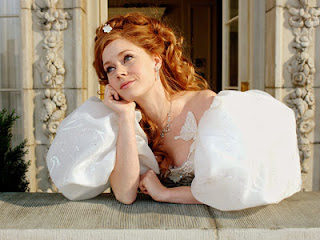 When he walks in on her taking a shower and subsequently ends up in an embarrassing clinch on top of her, with her in just a towel, just as his fiancée walks in. He finds himself resolutely dumped. Giselle helps him out by sending round a few doves and flowers, which works a treat and his fiancée forgives him for having a half-naked girl in his apartment because she trusts him. I shall remember that one. Women are strange.

Her prince follows her down to 'hell'. Where he stabs a bus after mistaking it for a monster then gets run over by cyclists in the park. I can sympathise with the cyclists, bloody pedestrians.

As Giselle enjoys the New York experience she realises that her Prince Charming is not the right man for her and instead falls for her lawyer. Of course, it all ends happily ever after, albeit after an overblown scene with a dragon. Giselle is put in to a deep sleep only to be rescue by her lawyer's 'True Loves Kiss' and they all lived happily ever after...

HELLO? This rat you've just run off with has just dumped his long-term fiancée for you, a girl who he's only known for a day or two and who crawled out of a sewer. Love lasts forever? Clearly it doesn't. His ex gets the booby prize of the dopey Prince Edward.

I went into Enchanted not expecting too much and therefore was not disappointed. It was actually better than I had expected, although very cheesy and full of clichés. Timothy Spall does a good turn as the henchman Nathaniel, and an animated chipmunk called Pip puts in a star performance. Another fluffy bunny of a movie.

It's cold when we come out. Well that's the excuse for downing a bottle of mulled wine between us. I cook curry and then we watch our second film of the day, on DVD this time.

Based on Zoe Heller's novel 'Notes On A Scandal' is the tale of two seemingly sophisticated women who's lives become entwined but then dramatically unravel, proving themselves to be anything but sophisticated.

Judi Dench plays Barbara Covett (note the name), who is a well respected schoolmarm but also a lonely spinster. Cate Blanchett plays Sheba Hart, the raw new totty in the art room. Sheba proves herself not to just be inexperienced as a teacher but also in life. She is a teacher, a wife, and a mother, who is out of her depth in all three and for someone her age, thirty-something, she is astonishingly naïve. She is just begging for someone to take her under their wing. Barbara is eager to oblige and quickly moves into the flighty newcomers life.

Dench voice-overs the film as her character scribbles in her diary, adds gold stars, and makes bitter observations about the world. The film moves at a fast pace and doesn't keep you hanging around while it builds the scene. Sheba starts giving a young pupil after school art tuition but he quickly makes it obvious to her that he can think of better things to do with her after hours. Her attempts to repel him are not convincing and he senses that Ms Hart could be putty in his hands. Of this, he is not wrong.

She seems cast under his spell, caught like a rabbit-in-the-headlights and falls for the youthful passion that he dangles before her. Although even he must have been surprised at just how free and easy she is. So they embark on a tawdry and adulterous affair, generally carried out down by the railway line. Yes I know, here we go again, another film about married women who can’t keep their loins in check. When they upgrade from the railway line to the art room, Barbara stumbles upon what's going down, but promises not to tell for the sake of all, as long as she ends the relationship. Sheba though is weak and fails to give up her toy boy. She finds herself addicted and simply can't stop herself digging a deeper hole to throw herself in to.

Meanwhile Barbara installs herself as a regular feature in Sheba's life and family, who consist of her much older husband, played by the excellent Bill Nighy, who left his wife and children for the younger Sheba and her two children who are of similar ages to her lover, a son with Down's syndrome and a daughter with her own love troubles.

Barbara herself has skeletons in the closet and they slowly come out to play. We come to understand that Barbara has designs on Sheba, after another teacher spurned her and fled her job the previous year. Both characters at times get your sympathy but equally you start to feel pissed off with them but before you get too one-way or the other, something else happens and the story moves on.

When Sheba is torn impossibly between her family and her friendship with Barbara, she chooses her family. So Barbara betrays her secret to the school and everything in Sheba's life falls spectacularly apart as the police and the media get involved. 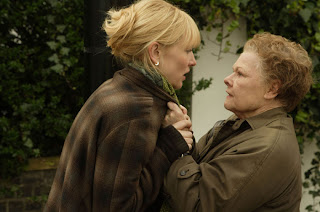 It's a gripping, intelligent film with a raw nastiness to it and which has so many layers to it. You simply hang on every scene and every word. It's a film about predatory behaviour but who exactly is preying upon whom. It's short but packs more into it’s running time than most films of twice the length. Excellent script by Patrick Marber of Closer fame. Another great English film with superb performances all round.

Our cultural day is still not over was we round up Bleak House by watching the final three episodes.