No Lap Dancers, No Hand Picked Models And No One Gets A Roasting

5.50am alarm again! Yep it’s another run with L and Doggo. My legs still ache from last night and they are even stiffer afterwards. A week off biking and my body starts to fall apart.

I take the bus into work. It's a good job I’m early because the bus is too, I only just caught it. It's half-empty today, half the world is clearly already on holiday. I take a good look at the bus driver wondering whether he was one of the naked drivers on the new Trent Barton 2008 calendar. Nope, too slim. 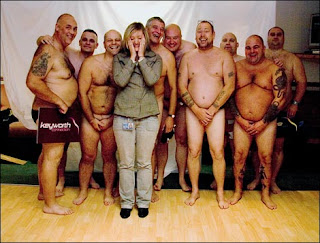 The latest research says that humour comes from the male hormone testosterone, which explains why women often don't see the funny side. Like the chap on the bus today who was moaning to his mate that his new girlfriend had dumped him because he accidentally sent her a 'sordid' text message that was meant for his 'more broadminded' ex. Apparently their names start with the same letter, so it was an easy mistake to make. 'Its not as if we'd been up anything' he told his mate, 'we were just exploring the possibility'.

We have a 'dress down' day today as it’s the last day and it's also free of charge, no raising money for 'charity' here. According to the internal email, we are encouraged to wear 'jeans etc, or stockings/suspenders, whatever takes your fancy'. Unfortunately no one, male of female, takes them up on that option.

Lots of other companies near us are not in today, the Xmas holiday just gets longer. I doubted the sandwich van would show up but it did. Someone ordered chip butties downstairs, loads for everyone; this really is a bad food week.

After work I head back to colleagues house. Where he has an impressive wooden floor that is full of possibilities, which he obviously hasn’t seen because his equally excellent rug is far too small. We share a beer and a small snifter of whisky.

The party is typical works party fodder, although there are no lap dancers, no hand picked models and no one gets a roasting, well not that I notice. For entertainment we get the Blues Brothers poorer relations, who's highlight is when they perform Rawhide on a blow up horse, Manchester United this isn’t. We share our party with more overweight teachers, some trendy graphic designers and a bunch of builders who look like the Mafia, complete with their trophy wives.

Stella is there and so is my old mate Boddington. I avoid both and stick to wine. I’m good, I only have around three glasses, partly because the good wine runs out. The food is surprisingly good for a Xmas do. The party is due to end at 1am but I hope to be long gone before then. The hotel where the party is, has a golf course and L is going to meet me by the putting green later. How romantic. Daughter and L, are at the cinema watching schoolgirls (St. Trinians) and are going to pick me up on their way home. Hopefully the film will give L some ideas for a new outfit. 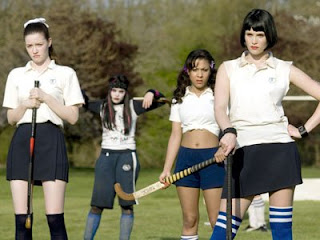 I get rescued and we head home for a sherry. Doggo is pleased to see us, even Son has abandoned him tonight and gone out 'partying'.
Posted by FitForNothing at Friday, December 21, 2007