I have to be careful from now on in about how I refer to the papergirl, as Daughter has just become one. Today is her first day. Not only is she doing a morning round but also an evening one. L helps her today but I feel this could be a very stressful few days for all concerned, until she gets the hang of it.

I rest the old legs and take the car into work today.

The afternoon is nail bitingly exciting as L and I bat emails backwards and forwards awaiting news of how Daughters evening paper round went. The suspense almost kills both of us.

I get home and take Doggo on the pond run. It’s traumatic because some people simply cannot tell the time and have started letting off their New Year fireworks six hours early. Either than or they’re all celebrating New Year in India.

I'm never sure how to take New Years Eve. Like office Christmas parties, it's a time when people who don't usually get out much, go out and let themselves go. For those of us who like to enjoy ourselves all year round, the night is always a bit of a let down. Usually because if you do go out, you're expected to hand over wads of cash for the dubious privilege of it being New Year.

We do go out, but for a quiet family Chinese meal with my parents. The place and the meal are both very good. We're not rushed and it's all very good value. We get home, some time after eleven, and settle down to celebrate the New Year again with Jools. Where his guests are pretending its New Year although they probably filmed the programme in July. Jools is clearly looking a bit hot under the collar as Kylie Minogue sprawls slinkily over his piano in a skin-tight gold dress as they perform a slowed down version of her oldie 'I Should Be So Lucky'. 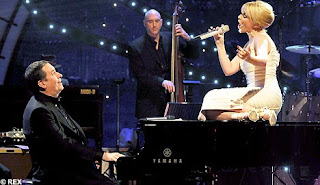 Someone fetch the oxygen for Mr Holland. 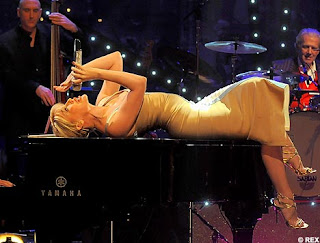 We even crack open a bottle of Champagne and we don't even like Champagne, well it was a gift.

It's all too much for Son who declares he's going to bed. Which is odd, because he's up until 2am most nights, yet he turns in on New Years Eve before midnight or perhaps he's just being smart and refusing to be exploited by the 'occasion'.

Earlier L had offered Son a party at our house which was very brave of her. She told him we'd leave them be and go out clubbing while it’s on. He seemed horrified at that and said he’d have to make up some other cover story because he’d be too embarrassed to tell his friends that we’d gone clubbing.

Oh dear, what it is to be embarrassing parents. All his friends' parents must be like my forty-something friends. People who have interpreted their thirties and beyond as a time to 'settle down' and turn their backs on everything fun and exciting. Oh well.

A Happy New Year to everybody, in particularly the girl in boots who started my new year off with a bang at 2am.
Posted by FitForNothing at Monday, December 31, 2007