There Is A Way To Be Good Again

I'm in work today and it's incredibly windy as I bike in. It's not actually a head wind or a tail wind but more of a sideways wind. Terrifyingly exciting, sort of. L is at home and obviously isn't worried about me, or asleep, because it's nearly ten thirty when she checks I'm still alive.

There are just five of us in the office and no sandwich vans to feed us. Some kind soul fetches me a wrap from Sainsbury's.

After work I bike to the pool for another swim. L tells me to cycle slowly. Unfortunately that’s out of my hands, it depends which way the wind is blowing. It's also started raining, so I try my new waterproofs out for the first time.

The pool was busier today, mainly kids though. L reckons people give up exercise for Christmas like they give up chocolate for Lent, she might be right.

In the evening we go to Broadway to see a film that L has been really looking forward to. She's already read the book. The film is Kite Runner and is the story of two boys being brought up in pre-Soviet Afghanistan. Amir is of a well off family, while Hassan is the Hazara son of Amir father's servant. They become best friends and the boys fly kites together in the skies over Kabul, competing against other kites and 'cutting' them down. 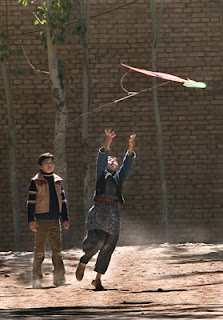 Hassan will do anything to protect Amir but when Hassan is raped by other older boys, Amir is unable to reciprocate and protect him. This results in Amir thinking he has committed what his father refers to as the greatest and only crime, theft. Hassan has had his innocence stolen from him. Amir now knows he must let his friend go and manufactures a situation over a 'stolen' watch.

After seeing the boys on screen for so long, it is quite a shock when the story moves to America, as Amir and his father flee the new Communist regime. There he grows up and gets married.

Then years later he gets a call, to return home to Kabul where he has to risk his own life to find Hassan's son after Hassan himself is murdered by the newly installed Taliban. Afghanistan was first shown as a beautiful country but it is now depicted as bereft of colour, all the trees cut down by the Russians, and buildings demolished during fighting with the Taliban. A country where adulterers are now stoned in the soccer stadiums by the Taliban, who have even banned kite flying. Amongst all this he seems to find himself, rescues Hassan's son and takes him back to America. 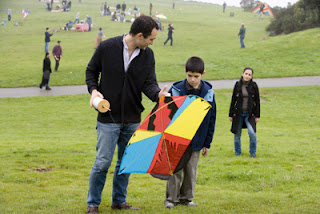 The film was compelling and the cast were excellent, in particular the children who played Amir and Hassan, but I would have liked to have gained more insight into Afghan culture, the political situation, and life under the Russians and the Taliban. It is much less graphic than it could have been. Both with the war and in the way the crucial scene involving Hassan's rape was depicted, which just didn't come across strongly enough. There is only a small amount of violence actually shown in the film but I think more would have added to the effect. The 12A certificate was perhaps too restrictive.

Also the escape from Afghanistan was extremely implausible and descended into a typical Americanised shoot up/car chase. Apparently, according to L, this was not true to the book. For me it distracted from what was a very good film and a moving story about where 'There is a way to be good again.'
Posted by FitForNothing at Friday, December 28, 2007